We have no idea what we’re doing.

Back in February, Skipper and I started to muse that if our favorite Blue-Laced Red Wyandotte hen went broody in the spring, we might let her hatch out some chicks.  How adorable it would be to have her lead chicks all over the yard!  Not long after that, and well before we’d had a chance to think through the logistics, Hen went broody.

We considered our options in our small set-up.  There weren’t many.  We tried moving Hen to a brooder in the workshop.  She wanted to be back with her flock, and she returned to her nest box.  We decided, what the heck, collected some eggs and let her sit in the nest box.  The other hens, after some protest (not laying, then laying UNDER the coop), went back to laying in 2 nest boxes instead of their usual 3.  And we waited.

Hen was an awesome broody.  She sat devotedly, but also took care of herself.  She would get up, eat and drink, take a walk and stretch her wings, take a dust bath.  On a nice day, we would let her out of the run by herself, and she would spend twenty minutes or so stretching and flapping and walking around the whole yard before returning to sit on her eggs.

When we decided to leave Hen in the nest box, we started thinking about how the chicks would manage when they hatched.  They needed a ladder!  This was our first concept of how to hatch chicks in the coop:

Eggs take 21 days to hatch, in theory.  But in reality it can take 20-23 ish, and there are always reports of extremely early or late chicks that still make it.  20 days was April 4th, the earliest date for the first eggs that we put under Hen (the majority went under her about 12 hours later).  That Wednesday came and went, as did Thursday, day 21.

On Good Friday, we started to see some action–heard some peeping, and then saw our first chick emerge! 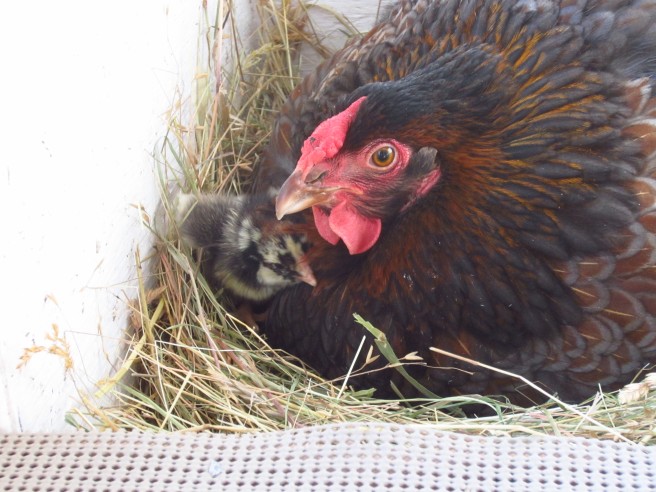 As the big day approached, though, we had started to realize that the ladder was not going to work.  Day-old chicks would not be able to get up and down.  Where would they eat chick food or get water? If all 9 eggs hatched, how would they all fit with Mum in the nest box?!  How would the rest of the flock react to these little bodies running around?  How would Mum react to the rest of the flock getting near her babies?!

I did some research on how folks raise chicks with the rest of the flock in the coop, but most of the time people who do this have lots of space, and simply partition of a section.  Our 4×8 coop is tight for our flock of 9 as it is…Then I saw it.  The chick condo!  Skipper built a platform coming out from the nest box, complete with security edges, so that the chicks could walk out from Mum and get to food and water.

By Friday night, Skipper announced that we had twins!

Saturday morning, though, was very sad.  Skipper went down early to check on everyone, and found that one of the twins had made it, but the other had not, and a third chick, that we had heard peeping under Hen the night before, was lying crushed underneath her.  We couldn’t be sure what had happened, but that night had been a very cold one–frosty and below zero celcius.  It was possible that the wee one had just not been able to keep warm enough overnight.  That morning was still chilly, and we knew there were more chicks on the way.  We set up the heat lamp in the coop, over the platform, which meant that the first chick could now be comfortable when s/he left the nest, could get to food and water, while Hen hatched out the rest of the eggs.  As the next chicks emerged all dry and fluffy from under Mum, we gently brought them out of the nest and dipped their beaks in the waterer.  Before long, we had 5 happy, active chicks racing around from the nest to the warm spot under the heat lamp.

By Sunday morning, Hen had left the nest.  She had given up on the last 2 eggs hatching, and sure enough, when we checked them, there was no noise or movement.  We gave up on them too.

But once Hen was up and moving around, the limitations of our set-up quickly became obvious.  For one thing, the heat lamp was too hot for Hen.  She would jump down off the platform, which we had anticipated, thinking that she could get to food and water and move around.  But we hadn’t thought about how much Hen would want the chicks with her!  She desperately wanted to show them around the coop, introduce them to the food and water, to scratching and running.  She would jump down, scratch about, find food, call excitedly and the chickies would all run to the edge of the condo.  At one point, I went to check on them and saw that there were only 4 chicks!  Hen was sitting on the floor of the coop, and luckily the 5th chick was tucked safely underneath her.  No idea how it got down there!  And of course, it had no way to get back up! Back to the drawing board…

After contemplating our options once again, we decided to repurpose our wire brooder and move it into the chicken run.  The brooder was at least a bigger space, on the ground, had room for food and water, and in the run would be predator-proof.  With a few alterations, it worked great.

Then we had to decide whether to separate the new family from the rest of the flock, and if so, how to do that in our limited space.  For the first day or two, the new family slept a lot and seemed happy to stay in the brooder.  We shut the rest of the flock out of the run for an hour or so each day and let Hen and the chicks get out and explore.  Watching them all in the dust bath was a hoot–until one of them got lost underneath her!  We let the flock back in and watched closely to see what would happen.  Although they were all mostly ok together, one chick did get pecked, and all the big birds were extra curious about the food that might be in the brooder…and I fussed like the mother hen, worried that the babies would get stepped on or lost in the big run.

So here’s what we have set up now:

This is working great at the moment.  The chicks are growing fast, and my hope is that in another week or so, we will start experimenting with taking down the fencing and having everyone mingle.  The chicks, now a week old, are racing around, digging and scratching, and have no trouble following Mum from quite a distance.

The learning curve for all of this has been steep this week, but we knew this time around would be.  Our loose plan is to do this again, so we’re really figuring out the process before we build (and by “we”, I mean the Skipper of course!) anything more permanent for brooding chicks with a broody hen.

What we’ve learned so far?

I’m pretty sure that our poor-ish hatch rate is because we didn’t keep our eggs cool enough.  The books say, keep the eggs at “room temperature” “on the counter in the kitchen.”  The problem?  Our woodstove and open-plan living space.  Our kitchen stays at about 25 during the day, is very dry, and gets a lot cooler at night.  Not a great place to maintain the integrity of an egg!  So next time, we will try for a bigger batch of eggs, and take better care of them while we wait for the broody to take over.  On this hatch (although its hard to tell exactly yet), it looks like the eggs we bought are largely the ones that became healthy chicks–those are the ones we kept cooler and were fresher.

I don’t think we’ll go back to brooding in the house ourselves.  The natural way is SO much better, despite the bumpy start.  It’s amazing to see the chicks in the hay and dirt so quickly, and handling ordinary temperatures so young!  They are getting so much richer a chick experience than we could ever give them.  There’s no heat lamp outside, and the chicks don’t seem to care at all.  They tuck under Mum at night, and whenever they need to warm up.  Otherwise, they are out on our 10 degree days with seemingly no trouble at all.  They have no need for vaccinations or medication, because they are building their immune systems on the deep litter in the run–eating dirt, flock poop, and all the low levels of bacteria and micro-organisms.  I keep a little apple cider vinegar in their water to keep their probiotics up, and so far so good.  Their environment is in every way superior to living on a shelf-liner in our bathroom!

If we ever build another coop, we’ll build in an area that can be flexible for brooding.  But in the meantime, we can do this in our small set-up, with a little resourcefulness.  There are lots more stages in this process to come, though, so we’ve got a fair bit to figure out yet.  Like, what will we do when this batch grows up?!

And, yes, we’re kinda hoping that in another month or so, Hen or another hen will go broody, and we’ll get another chance to apply what we’ve learned.  By the end of the summer, we will either have a staggered flock or a replacement one.  At least that’s the plan!