It’s officially spring and usually in these parts, we’re well into cherry blossoms and pea sprouts.  This year, though, has been full of fits and starts.  I don’t know whether the universe is in the erratic throes of birthing a new and transformative season, or whether mother nature just can’t make up her mind about what she wants!

The weather has been wild.  One day full of sunshine and the promise of gentler times ahead, the next day we experience every possible weather combination all at once: gale force winds, rain, sunshine, snow, hail…

The greenhouse seeding has begun, and onion sprouts and early brassicas in their soil blocks are coming along on their heat mats.  It’s time to start the tomatoes, basil, and other warmer summer veg inside.  It’s long past time to get the ultra-early spring crops in, the garlic, fava beans, peas, radishes, but we’ve alternately been busy getting the bones of the garden back into shape and hiding from the weather by the woodstove.

Speaking of the garden’s bones, big changes are afoot…

Trees are coming out and being heavily pruned back

And more shrubs and trees are being moved to make way for new veggie beds.

In the picture above, you can also see where we will add a small deck; it will extend from the pond, which you can just see at the top, and extend over the concrete circles in the foreground.

On the right side of the garden, the shrubs are going, going, gone…

And then there are the chickens.

The first sign of spring on a homestead, it seems, is a broody hen.  Triggered by the warming days and lengthening daylight, a hen will start to want to sit on her eggs and hatch out chicks.  Even though we were planning to honour that process, if the opportunity arrived, we weren’t at all prepared when our favorite hen, Hen, one day wouldn’t get out of the nest boxes and stopped laying eggs.

Once we decided we would let her go through the process, there was much to do. According to all reliable sources, a broody hen needs to be on her own in a safe place, away from other chickens, to hatch out her chicks.  So first we had to find such a place!  After much debate, we decided on a corner of the shop, which isn’t far from the coop, and would be sheltered, quiet, and predator-proof.  We set up a pen with a comfy nest in a corner under the window.  Then, under cover of night, as suggested by every source we could find, we moved her from the coop to her new “broody pen.”  She was completely asleep, and didn’t even move when we rearranged her in her new nest.

In the morning, however, when I went to check on her, she flew out of the box and headed back toward her flock.  I let her back into the yard, and after socializing for a bit, she went back into the nest box to sit!  Hmmm.  Try again.

The next night, we moved her again.  This time, we thought, we’ll just keep her closed in for a day or two until she settles down.  The next morning, she seemed perfectly content in her new space.  Until she decided she was now ready to go home.  Once she started flapping around and being generally distressed, we didn’t have the heart to not let her out, so back to her nest box she went.

That day, we decided that our goal is to work with nature, and that clearly, when you fight nature, you generally lose one way or the other.  So that night, we just lifted her up in her nestbox and put the eggs in underneath.  Chicks are due April 4th-5th!  Then we’ll have to deal with the logistics of chicks in the coop with everyone else.  Or maybe Hen will come around to the idea of being moved, with her chicks, to a safer spot.

What eggs is Hen sitting on?  We would have liked for Hen to have hatched out some of her own eggs, but she stopped laying before we figured out we needed to keep some out of the fridge!  So supplements it was.  I bought some more Blue-Laced Red Wyandotte eggs from a local breeder.  We are also using some of Patti and Selma’s eggs.  They are Silver Laced Wyandottes, who have also been mating with out head Roo, who is a Blue-Laced.  Apparently when you cross Blue-Laced Red with Silver-Laced (which is black lacing of white feathers), you get something called a Blue-Laced Silver, which is blue lacing around white feathers!  Sounds gorgeous, so I have my fingers crossed…

Being plunged suddenly into research about broody hens and hatching eggs has opened my eyes to this whole other question of sustainable, non-industrialized livestock.  I knew that no commercial breeds (of pretty much any animal) are able to reproduce naturally.  One reason conserving heritage breeds is so important is that it preserves genetic diversity, but the other reason is that the quality of animals being able to reproduce and raise their own young has been bred OUT of livestock over the decades.

I hadn’t really come to terms with what that meant on the ground today though, until going through this process.  Many poultry breeds, even heritage breeds, are now unreliable brooders and mothers.  Even notoriously broody breeds, like our Buff Orpingtons, will GO broody, but may not be able to follow through and sit long enough to actually hatch out eggs.  Or they will hatch them but have no interest in raising the chicks.

Broodiness, even in the burgeoning backyard flock world, is largely treated as something to be broken.  When birds want to sit on eggs, they don’t lay their own, and thus their primary purpose for the homestead is gone.  Many people look at the bottom line with their birds, and base decisions on the economics of whether the eggs are paying for the feed.  If not, the hen is culled.  So broodiness is a pain in that context.  And I’m not judging.  If all of my hens were broody through spring and summer, I’d be annoyed too!  Or if I had an urban flock without a rooster, again, the instinct to brood might be a big source of frustration.

But consistently eliminating the broody trait has left us vulnerable and reliant on electric incubators and industrial scale hatcheries, completely removed from nature’s free and reliable process.  Once again, when we take on a process that nature provides, we have to simplify the process to imitate it, and we require massive resources to imitate it so insipidly.  Where will we be when our food doesn’t produce itself, and we have no fossil fuels to produce its weakly simulated cousin?

So, the grand experiment continues.  We have no idea if this will work out, no real plan on how or if to expand our flock.  But Life, in the form at the moment of Spring, clearly does have a plan.  And we’ll try our best to keep up!  Go Hen! 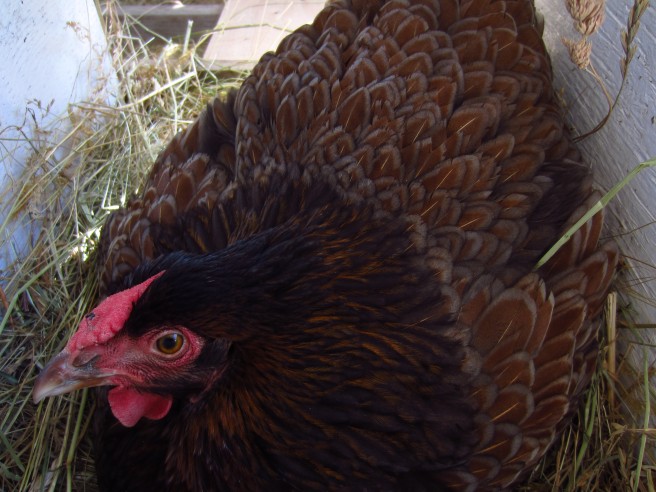