It’s a pleasure to be joining gardeners and small farmers everywhere in the new year ritual of choosing seeds for the year ahead.   I have been amazed at how quickly I’ve let go of 2010 and have been watching for the signals of spring.  The daylight hours are already expanding rapidly, we’ve had a week of blazing sunshine despite cold temperatures, and the January schedule is filling up in a way that makes it feel like February–time to plant peas, spinach, radishes and other cool spring crops–is just around the corner.

After my experiences as a total newbie food gardener in 2010, I’ve made some decisions about my criteria for seeds in 2011.  Last year I knew I was being ambitious in how much food I wanted to grow my first time around.  I decided to simplify and stay conservative to help my chances of success–I bought almost all of my seeds from just one reputable company in my region, and I focused on varieties that promised to do well in my area under less than desirable conditions.

The strategy generally worked–especially with tomatoes.  Though it was a terrible year for tomatoes, I did ok, partly because of the varieties I chose, and partly because of the sheer volume of plants I ended up with!  But I realized pretty quickly that there wasn’t any point in getting lots of tomatoes regardless of the weather if they didn’t really taste very good!  Last year featured Siletz, which did reasonably well under adverse conditions and tasted ok,Taxi, which didn’t taste like much of anything, a couple of cherry tomatoes, Golden Nugget and Gardener’s Delight, which were extremely tasty, and the Gold Nugget was very early too, and a roma, Amish Paste, which did pretty well at the end of the summer as a sauce tomato, very productive and ripened pretty well inside during a wet September.  But it tasted awful fresh, so it was really a single purpose fruit.

So this year I’m making some changes.  I’ve decided I’m ready to focus on open pollinated seeds, so that I can start experimenting with seed saving.  I’m also dreaming of a hobby/ market farm one day that specializes in heirloom veggies and heritage livestock, complete with the stories and histories to share with customers.  That’s a either a long way off or just a delicious fantasy, but it has inspired me to also focus on heirloom seeds this year.

Last year I went through the seed catalogue closely, but decided not to mail order; to save the shipping costs, I just went to the local stores with my list and found most of what I was looking for.  But it took time, and I want to be more organized this year.  So I’ve chosen my companies and I’ll be sending off orders direct.  I hope to bypass the impulse buys that way too!

Here are the seed companies I’ll be ordering from this year:

West Coast Seeds.  This is the big, dependable, local company that developed out of Territorial Seeds in the US.  I bought all of my seeds from them last year, and the seeds were rock solid reliable.  They have a large selection overall, and where I can’t find what I’m looking for elsewhere, I’ll be heading back here.  They have a good selection of organic, open pollinated seeds, but they carry others too, which is what expands the selection.  And, of course, I still have a large stash of their seeds from last year that I’ll be drawing on this season too.

Stellar Seeds. Stellar is a wonderful smaller company based in the Kootenays (Eastern BC).  They focus exclusively on organic, open pollinated seeds and ran the seed saving workshop at our local Seedy Saturday last year.  Great people that I’m looking to support, but a smaller selection overall.

Saltspring Seeds. Dan Jason at Saltspring Seeds is a towering figure in food security and food activism, and his farm on Saltspring Island has been an important source of organic, heirloom, open pollinated seeds for 40 years.  They have a smaller selection overall as well, but they also carry some unusual and tempting goodies like garbanzo beans and lentils (!).  They are also our closest possible match climate-wise.

Two Wings Farm.  Two Wings is a very small operation just outside of Victoria–as local to us as it gets!  As you can see by the website, they have the best selection of heirloom and unusual open pollinated tomato varieties I’ve seen!  The most important criteria for me, though, is that they actually discuss tomato flavour in some detail, complete with 11 varieties that make their top 10 list. 🙂  They also have a number of varieties that come from north eastern Europe, which means they are reliable in cooler climates like ours without too much (if any) protection.  I’ll be picking my tomatoes exclusively from them–wish me luck narrowing the list!

Heritage Harvest Seed. I’m so excited about this company!  This is an operation in central Canada–Manitoba–that specializes in saving endangered and rare heirloom seeds.  And what a selection!  I’ll be covering as many of my needs as I can from their list, which I know will mean some experimentation on my part.  The Manitoba summer is shorter than ours, but also hotter, more humid, and more intensely sunny for a longer period of time.  But that’s the beauty of heritage seeds to me.  These were the seeds that immigrants brought with them from their homelands and climates, and they adapted the varieties over the generations to their new environments.  With a little patience, and where the characteristics–like flavour!–warrant it, I can do the same.  And who can resist stories like this: 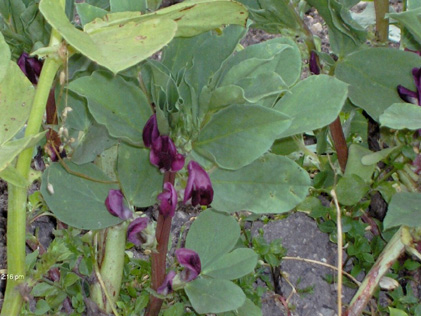 At one time, not long ago, this broad bean was on the verge of extinction. An elderly curator of precious bean seeds lost almost all of her harvest but luckily sent the remaining seed to Henry Doubleday Research Association (HDRA). From just four seeds, HDRA was able to successfully propagate this bean and save the Crimson Flowered Broad Bean from extinction. This is one of the true success stories when it comes to saving heirloom vegetables. The Crimson Flowered Broad Bean is an extremely ornamental plant. It is covered with crimson flowers all summer long and into the fall. It is also very productive and produces many tasty green fava beans that can be used fresh or dried for winter use. One of my all time favorite vegetables and definitely pretty enough for the flower bed! EXTREMELY RARE.

Makes my list!  And demonstrates once again that I am a sucker for a good story.  I had even decided not to plant fava beans this year! 🙂  Oh well, I can always feed them to the chickens….

So what seeds have you excited for the new year?